I am Dr. LaWana Richmond and I curate this web page. We live in a moment when adversity and the opportunities it presents beckons us all to rise above ourselves. I have been in the business of making things happen (often something out of nothing) for my entire career.  Let me know how I may be of assistance. If you're trying to get on my calendar, click here. I invite you to engage.  Whether it be political, community,  equity, inclusion, or other forms of activism - Get off the sidelines.  I did.   Subscribe to updates if you are interested in staying informed. If you are familiar with the work I do and want to be supportive, click here to buy me a coffee.

In the spirit of Kwanzaa, Dr. LaWana will be hosting a free presentation on Kwanzaa and Afrofuturism on Zoom - 12/23/21 at noon.  Here is link. Feel free to share info about upcoming events and provide any feedback or questions. 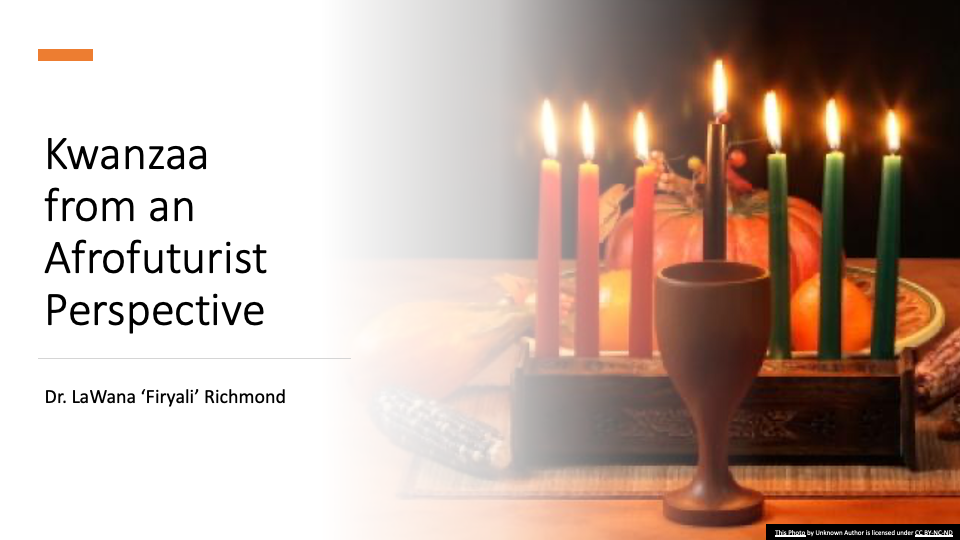 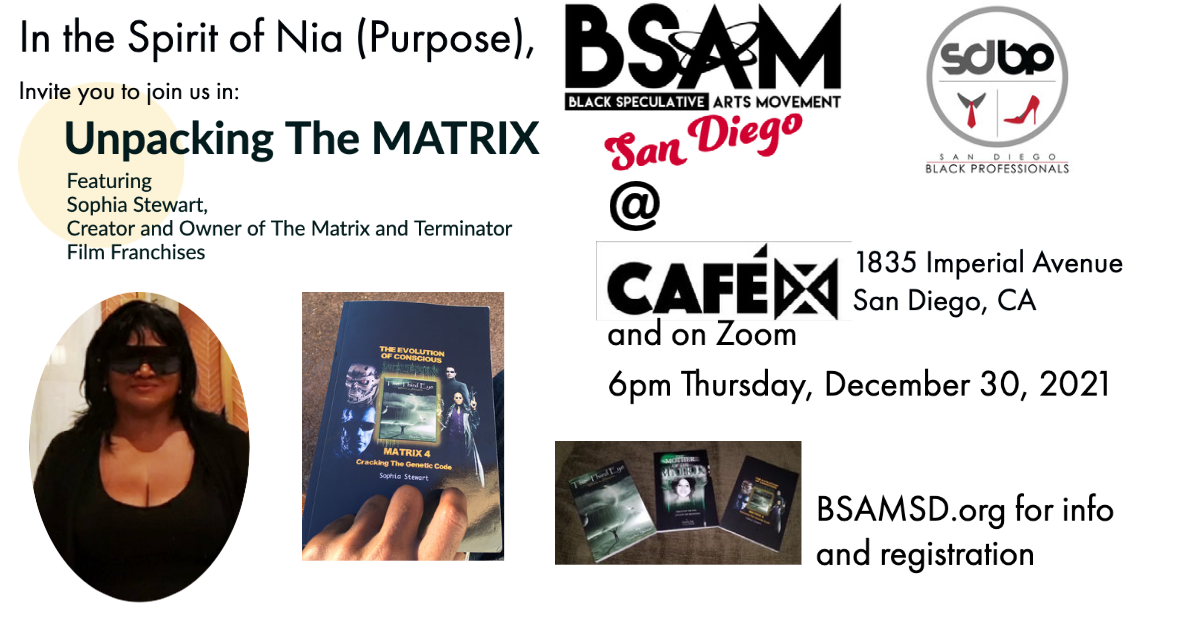 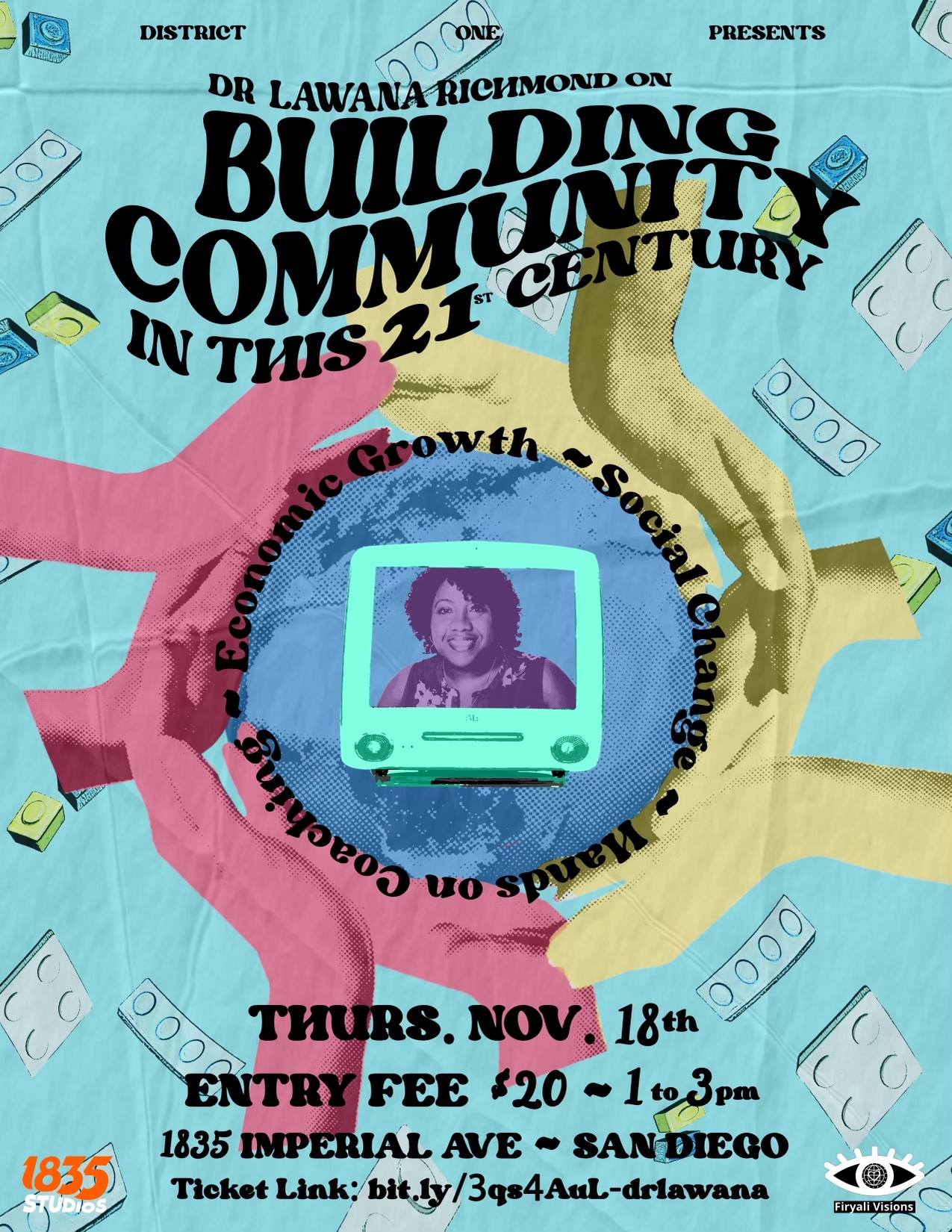 Dr. LaWana on Building Community in This 21st Century Let's talk about building cooperative and collaborative communities that support your business, organization, initiative, and or values.  Dr. LaWana will share theory, tools, tips, and techniques for connecting with customers, constituents, neighbors, or clients.

“There was a restlessness in the creative community at the beginning of this decade, a dissatisfaction with a certain aspect with politics going on, and a desire to get the art and political ideas a platform. That lead to us forming, putting together the exhibition, and then me subsequently writing the manifesto for the movement.”

The Black Speculative Arts Movement: Black Futurity, Art+Design is a 21st century statement on the intersection of the future of African people with art, culture, technology, and politics. Dr. LaWana Firyali Richmond has been appointed by Dr. Reynaldo Anderson to organize and lead BSAM San Diego. Appointed by Dr. Reynaldo Anderson to serve as San Diego Coordinator, I look forward to co-creating and implementing visions for our future with you! Let's link up like Voltron and make some things happen! 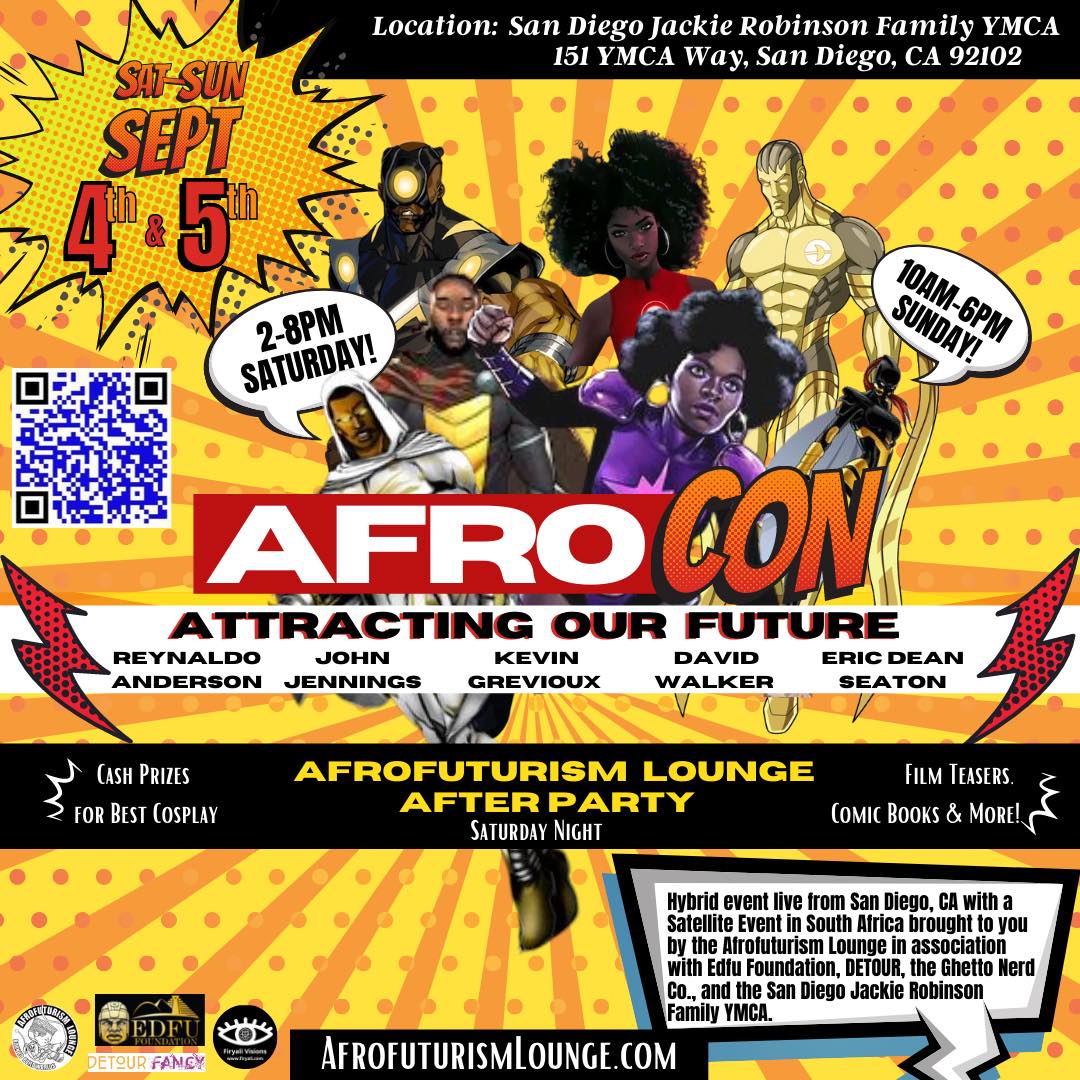 2021: September 4th and 5th- Hybrid Event Over 1,000 people between the ages of 2 and 82 visited Afro Con this year.  Our Vision is to provide an educational, entertaining, and informative space for creative and critical thinkers alongside community builders to experience speculative futures and the multiverse as an exploration of art as well as a world of opportunities.  Subscribe to stay in the loop.

Afrofuturism Dream Tank is an immersive experience of art, music, comics, science fiction, science fact, history, and current events curated and facilitated by Dr. LaWana Richmond.  It seeks to catalyze one's imagination to dream forward to co-create visions of the future we want with a focus on reverse-engineering the process to identify actions that support manifestation.  At a minimum, you will be entertained and at best inspired as well as energized. 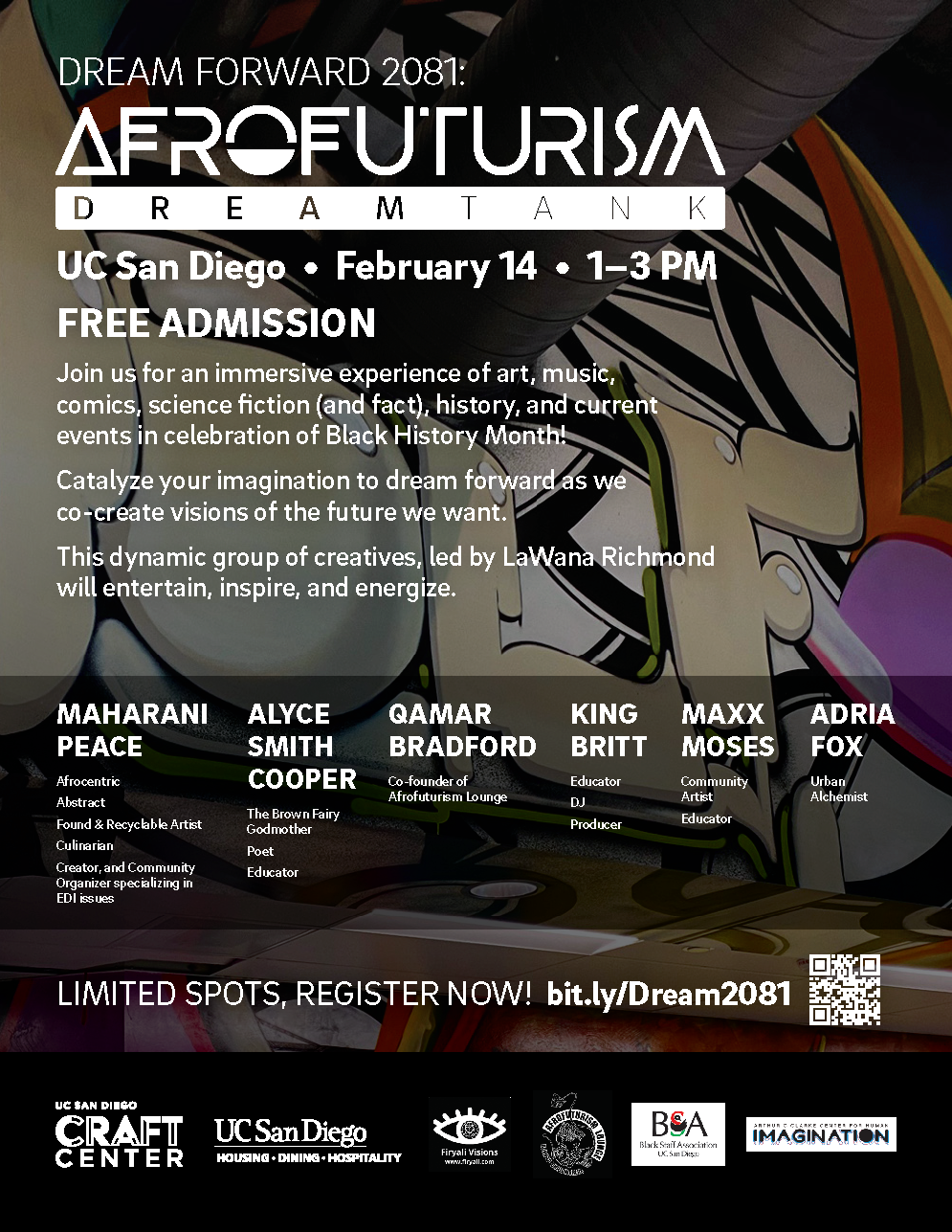 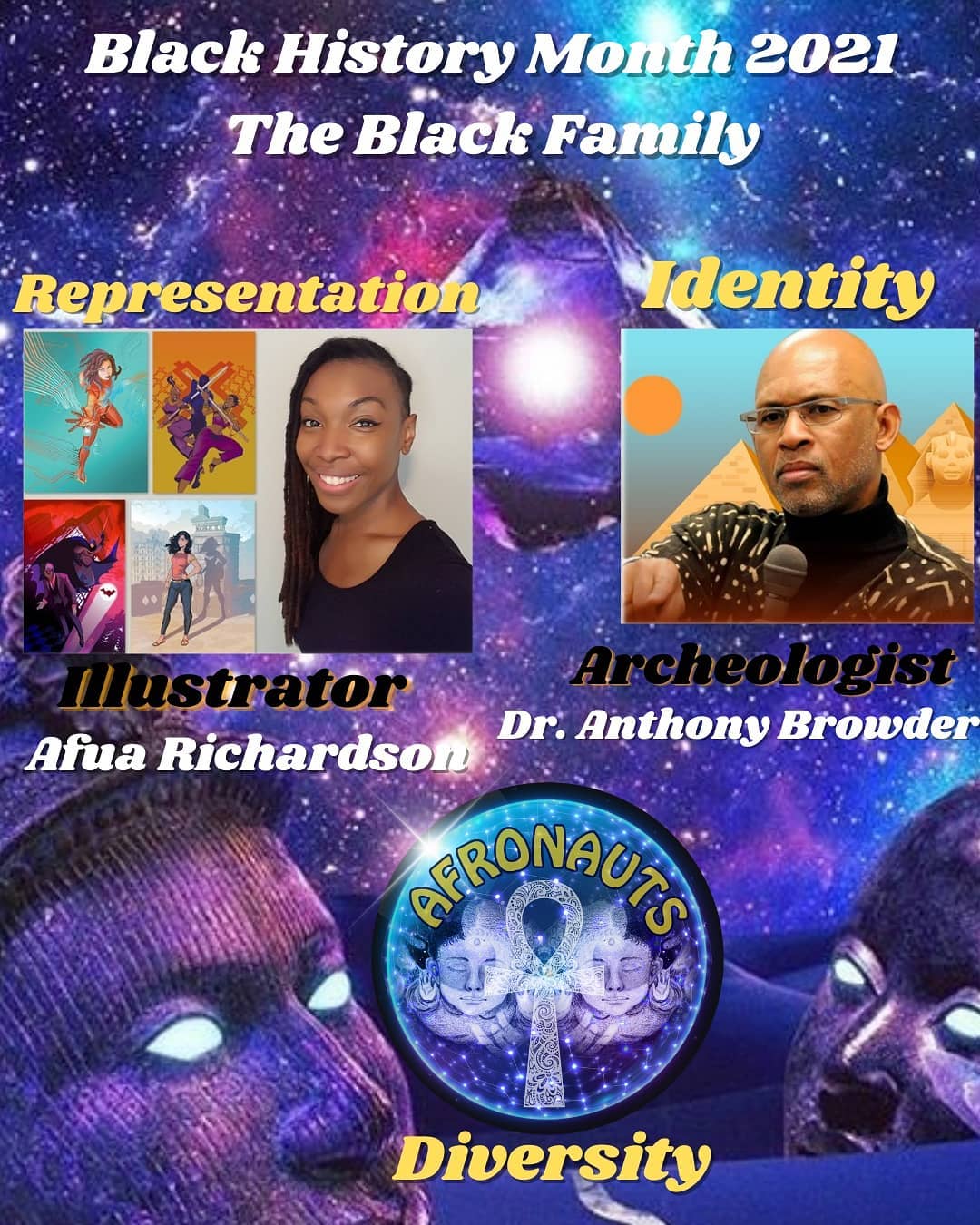 Monday, February 15, 2021, we recorded a live interview with Dr. Anthony Browder and Afua Richardson on the next episode of the Afronauts.
Subscribe

You can ask questions, get more information about my platform or qualifications, or just stay in touch. LaWana@firyali.com

"Your work is amazing and forward-thinking. I know April, my daughter would like to envision future schools as micro multi-aged schools where subjects of real import are taught to children, that nature would play a large part of the education for all ages, that history be taught truthfully and that all are treated as individuals with no labeling of special needs but each child taught according to their individual needs.   "Loyalty to a petrified opinion never yet broke a chain or freed a human soul." Mark Twain   ~Mari Peterson

Dr. LaWana Richmond is a selfless cognizant leader. She pays attention to details and will make decisions that benefit the common good. She is trustworthy and transparent.  As an educator and a parent, I believe that she will serve in an unbiased way. Sincerely, Dr. Barney J. Wilson

As a student affairs professional trying to figure out my own pathways, I am inspired by Dr. Richmond's story and her passions.   Best regards,   Kyler Nathan IV

The breadth and depth of content curated will vary and occasionally events and programs will come up spontaneously.  Subscribing to this list is one way of ensuring you don't miss anything. I'm looking forward to connecting with you on and off of the internets.